In August 2014 I began full time settled ministry at the Unitarian Congregation in Mississauga.  Previously, I was a half time consulting minister to the Unitarian Universalist Congregation of Durham in Whitby, Ontario.  I currently serve as Vice-President of the UU Ministers of Canada (UUMOC).  Previously, I served a 3 year term as Secretary to the Board of the Canadian Unitarian Council, the national denomination. I live in Brampton, Ontario with my dog, Tikko, and two cats, Tempest and Blaze.  My son is at university.

Wordchalice is my Tumblr repository of quotes and readings for worship.

In September 2012 I was welcomed into fellowship as a Unitarian Universalist minister.  In October 2012 I graduated with a master’s in divinity from Waterloo Lutheran Seminary and received the Graduate Gold Medal for Academic Excellence.   I finished my internship in June 2012 at First Unitarian Congregation of Toronto, Ontario, Canada.  I also hold a Master’s in Environmental Studies from York University and a Bachelor of Education from Queen’s.  As a writer, I have published poetry, speculative fiction, essays and articles, winning awards for fiction and poetry.  I have a piece in the UU 2013 meditation anthology Falling into Sky.

I was raised in suburban Mississauga as an agnostic/atheist, and I discovered Unitarianism in 1999 when my partner and I were seeking a spiritual community where science and myth could fit together.  I turn to nature, science fiction, and the chalice for my spiritual nourishment.

My particular interests in ministry are focused on language and theology:  how we as UUs name and frame our spiritual orientation. 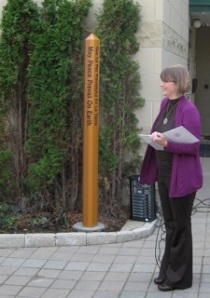 Unitarian Universalism's key symbol is the flaming chalice, the living light. But our chalice also holds the healing waters of community and the diverse flowers of the earth; it can even be empty, bringing us to the mystery. The chalice is empty the way the universe is empty – vast but all encompassing.

The empty spaces - the silence - allows us to hear the music, take a breath, ground ourselves. It brings us back to all the quiet undercurrents that connect us and all the beings on the earth.

The Rev. Fiona Heath is a UU minister with the Unitarian Congregation in Mississauga, Ontario.